In April 2016 our Adeline whelped nine healthy puppies and quickly developed into a great mother as she successfully weaned nine beautiful pups destined to carry on their parent’s success in the field. We had planned to keep two of the pups to augment our guided hunt program and chose the first born male, Major, and the smallest female in the litter, Duchess. Our son, Travis, chose a cream and brown female which he named Darby.

During the summer months Travis and I worked the young setters on basic commands and exposure to birds. Darby and Duchess immediately showed great interest in birds and consistently would establish point and hold steady while we worked planted birds. Major on the other hand seemed to lack his litter mates’ drive to find birds and some days was just as happy chasing butterflies. While trailing the class on birds, Major excelled in the yard training department showing a great ability to quickly pick up on general commands with an interest to please.  We would have to be patient and hope that when he was ready for bird work he would let us know. 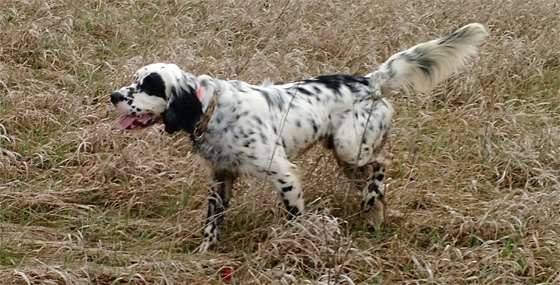 Over the weeks all of the setters continued to develop and we looked forward to exposing them to some wild birds in some controlled situations during the approaching fall season.

Then on a late afternoon in September while working the setters on some quail, Major’s bird switch came on as he hit the  scent of quail for the first time. In that moment Major became a bird dog and he his has continued to improve his bird finding skills each time in the field.

In November the young setters accompanied us to Clark, South Dakota for a three day pheasant hunt and although they saw limited field action I was impressed on how well they traveled and adjusted to the stress of life on the road.  Toward the end of the guided hunt season at Highland, I began to use Duchess occasionally to guide clients.  Duchess consistently hit points on pheasants while honoring her brace mate. As a bonus she has become a natural retriever and covers ground like her dad, Sweet Lou. 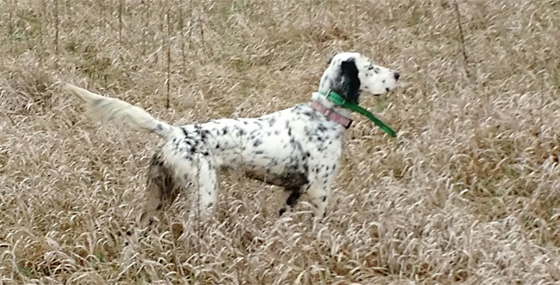 In March, we volunteered for the eighth year to guide for the Aiming for a Cure Foundation Celebrity Hunt at Highland.  This year Travis helped me and my partner, John Howard, guide hunters and during the course of the two day event Darby, Duchess and Major all contributed to a successful weekend.  Another setter from our litter, Asa, owned by the Ettleman family, also worked the field guiding hunters.  Pretty neat to see all these young setters from our litter well on their way to exceptional hunting careers.

With the preserve hunting season coming to a close on March 31, I took Major and Duchess out together at Highland for one last run.

Right out of the truck it didn’t take Major and Duchess long to find birds and both hit some nice points and backs.  For an hour both setters performed well as we went through various types of cover. Major seems to have his mom’s methodical close working style while Duchess has one gear covering large areas like her Dad. It struck me in the field that morning that Major and Duchess had come so far in eleven months and have the potential to be fine gun dogs.  Is there a Master Hunter Title in their future? We shall see!

All said it was a great way to end the 2016/2017 season and I can say with confidence, Sweet Lou and Adeline your help has finally arrived! 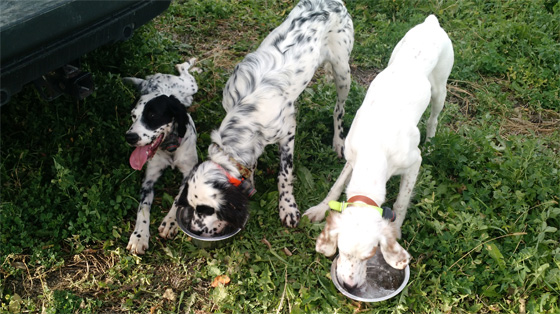