HomeBlogAiming for a Cure Hunt Day 1

Aiming for a Cure Hunt Day 1 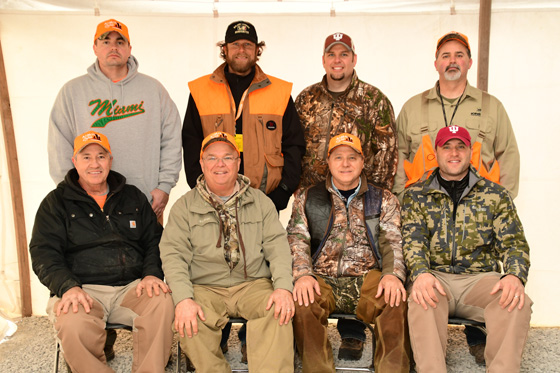 After a season of guiding and filming hunts we always look forward to finishing the year with the Aiming for a Cure Foundation Celebrity Hunt. For eight years we have participated as a guide for the hunt as a way to support the great work the foundation provides to families with children in the fight against cancer. This year we have brought along our film crew as we hope to spot light the incredible volunteers and celebrities all gathered at Highland Hideaway Hunting to support pediatric cancer research.

Early Saturday morning at Highland we link up with John Howard, co-owner of Kinetic Dog Food, and proud owner of Sophie and Libby both yellow labs. John has volunteered in various roles at Aiming for a Cure but this year he and my son, Travis, have been drafted into the guide service. Along with his Labs, John has GSP Rocky on loan for the weekend. My Sweet Lou and Adeline are veterans of the event but this year the rookies, Major, Duchess and Darby will see action.

John, Travis and I will be guiding teams that have been randomly selected. This year we will be assigned to field #9, an odd shaped field adjacent to the bird pens. I have guided in Field # 9 for the past two years and it can be difficult on both dogs and guides especially when Sunday afternoon rolls around. With the registrations completed we connect with our first group of the morning, Hoosier Daddy and their celebrity, Matt Duff. Matt is a former MLB pitcher for the St Louis Cardinals and is the current host of the hunting show, Major League Bowhunter.

Once at the field Travis, John and I discuss hunting strategies. Our starters will be old pro, Sweet Lou backed up by Adeline and Lab Sophie. Today the Setter Tales camera crew will be shadowing the action for an episode of Sweet Point’s Setter Tales.

The morning starts slow but the dogs find several birds which are harvested before we cross into the back field. The action picks up in a hurry as Lou and Adeline point several birds that fall to the gun and one is the banded bird. Hoosier Daddy’s team are superior wing shooters having won the event in 2016.  Matt Duff drops a couple roosters over Sweet Lou with his Weatherby over and under and at the turn back toward the pens we are half way to our bird limit.

We swing by the trucks and switch out some dogs putting down Darby and Libby. We finish the last 30 minutes of the session adjacent to the bird pens. The corner of the field was hot with action with the team scoring nine birds to hit their limit. Young Setter Darby did a nice job and finished the hunt with a nice point of a tight sitting hen.

We had a great time with Matt Duff and enjoyed watching him and the Hoosier Daddy team shoot over our dogs.  Hoosier Daddy is in position to repeat last year’s title if they can do well on the clay course.  After a few field interviews and team pictures we pack up and return to the Lodge for lunch and to organize our next team for the afternoon session. One down three to go!

Saturday afternoon we start round two with Nelson Electric and celebrity NFL Hall of Fame Quarterback, Jim Kelly. The dogs seem refreshed by the noon break and quickly are moving birds. Adeline nails a hard point out in the open that Kelly brings down for his first bird of the day. Libby, Rocky and the Setters are working well together as more roosters fill the guides game bags. As we approach a stand of thorny cover Lou locks on point honored by Adeline, Libby, and Rocky. Very cool!  With cover too thick to fly the rooster tries to make a run for it and is snatched on the ground by Lou. The retrieve reveals the runner to be the elusive banded bird. At the turn to head up toward the pens we are about half way to our limit of birds.

This time back at the trucks I give Lou a rest and give the young setters, Major and Duchess a chance. The Nelson group finish with some strong shooting and make their limit. No doubt they will be in competition for the title this year if they do well on the sporting clay course. Major and Duchess do a nice job with a retrieve by Duchess being a bonus. I’m pleased the Sweet Point youngsters are holding their own and contributing. All the dogs have been part of our success in the field today and the different breeds are working well together. Jim Kelly is always fun and generous taking time for photographs and interviews. We head back to the Lodge to turn in score cards and to do some dog maintenance. Tonight everyone heads to the Coralville Marriott for the AFAC banquet and auction. Tomorrow we will do it all over again. This year for the first time I’m confident that we have plenty of dog power to get to the end. As far as the guides  go, that could be a different story!