HomeBlogAiming for a Cure Hunt Day 2

Aiming for a Cure Hunt Day 2 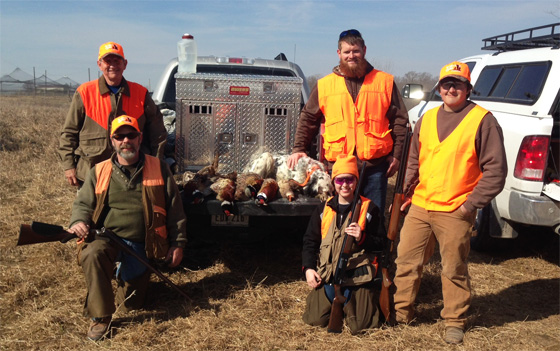 Sunday morning comes early as we air the setters and head down to Highland from the hotel. Travis is unable to guide today but Nate Ettleman will be standing in to help us along with his setter, Asa. We gather this morning’s team, Prairieland, and their celebrity, Baltimore Ravens All-Pro lineman Marshal Yanda. John and I decide today to do a push directly down the middle of the field, hunt the back area, and at the turn take the west edge along the timber toward the bird pens. The pass through the upper food plot in the middle yields no birds and I start to second guess our strategy. The dogs Sweet Lou, Rocky, Libby and Asa all are acting very birdy but as usual the pheasants are running well ahead of the guns.  In the back field the action picks up and two roosters are quickly taken down in the creek bottom.  We take a few more along the edges and then hit a pocket of cover where running birds have gone to foolishly hide. Within a few minutes Marshal Yanda takes two birds over Sweet Lou points and the team shooting fills our game bags. At the turn we push the lower side and Asa, Libby and Rocky work up a couple more roosters and one is banded. The corner near the pens again holds several birds which gets us to the teams limit. Like the other Iowa NFL guys we hunted with, Marshal Yanda was fun in the field, an all around good guy, that certainly knows his way around a shotgun. Back for lunch with three down, one to go!

Sunday afternoon finds me moving a little slower as we get ready for session #4. Nate and his setter, Asa, are working another field and John and I will guide the Roto Rooter team with celebrity, Erik Jensen. Jensen played his college football at Iowa and played in the NFL for several years with the St Louis Rams and Green Bay Packers.  At the field I give my young setter, Duchess, the start along with Adeline, Rocky and Libby. Up until now she has had limited action but with Lou done for the day we need her speed and nose. We push the field down the west edge along the timber and Duchess is hunting well. She and Rocky are both birdy and Libby is also showing signs that we will be seeing birds soon. Duchess works around a brush pile and locks up on point. As one of the team approaches a rabbit runs from the pile.  Duchess doesn’t move and I yell down to kick the brush pile. After a few seconds a hen pheasant tries to escape and falls to the gun. It seems Duchess may have figured this thing out. Good girl! 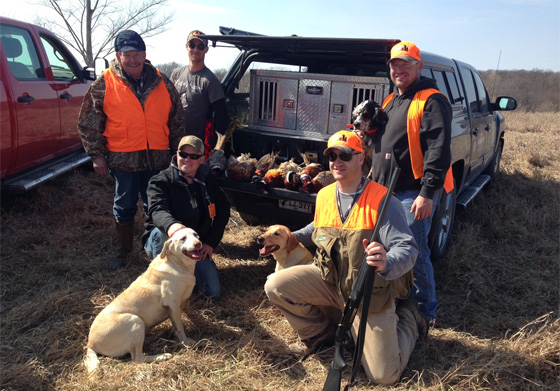 We jump a couple roosters but it appears most of the birds are running ahead of us. We cross into the back field and action picks up with the team taking several birds. We make the turn and I am very pleased with Duchess’ performance. She has Lou’s all out style of hunting and takes any opportunity for a muddy roll. As we head up toward the pens it is obvious that Adeline is tracking a running rooster. Erik Jensen follows her about 75 yards before she locks tight on point and Erik flushes and kills the hard earned rooster that is banded. We finish in the corner of the field by the pens and multiple birds fall to the gun. With twenty minutes left in the hunt we regroup and push down and up past the food plot toward the trucks. As we reach the top of the hill Erik and I take a breather and  as we talk Duchess decides to go on point in the short grass between us. No way there could be a bird there, right? Always trust your dogs nose! As Erik steps toward Duchess a final rooster erupts and is shot quickly by Erik. What a way to end the day!

As the hunt comes to a close I feel privileged to have been able to spend two days afield with many wonderful people all sharing a passion for the outdoors and dedicated to helping kids with cancer. I don’t think there is a more compassionate and caring group of individuals than the hunting community. I want to thank John Howard, Travis Kisner and Nate Ettleman for providing a safe and memorable experience for the groups we guided.  Already looking forward to next year!