My granddad was a bird hunter and outdoorsman. I first learned to hunt with dogs on his eighty acre farm in Bates County Missouri in 1965. Opening day of quail season was a special time and the male members of the Kisner family always gathered to pursue the three to four coveys that could be found on his farm. While hunting with his pointer Jack, Granddad taught us life lessons about gun safety, conservation of bird resources and how to read a dog that was making birds and just about to go on point. Hardened by years of making a living off the land farming and raising cattle, Granddad expected to show you how to do something once and then for you to carry your own weight. He owned one shotgun, a well used classic Browning A5 semi- automatic that was kept upright in the closet with a used Bull Durham tobacco bag over the end of it’s barrel. Legend had it that Granddad bartered the shotgun in trade as part of a cattle swap in the 1950’s. I remember being in awe of that shotgun while observing Granddad’s skilled marksmanship on a covey rise. Although the A5 wasn’t pretty with its share of scratches and a cracked stock, to me it was beautiful. I still remember the day he handed me the A5 and let me carry it in the field for the first time.

After Granddad passed in 1974 the A5 went to my dad and was his primary shotgun whenever we hunted together. Over the years the old A5 made numerous trips to Iowa for opening day of pheasant season. To this day each time I open my gun safe to prepare to head to the field a glimpse of the old retired A5 now in my care reminds me of how my passion for hunting upland birds with dogs began so many years ago on that Missouri farm.

My life with setters began in July of 2008 when I received a visit from close friend and hunting colleague, Ray Stefani. Ray and I have chased upland birds in Eastern Iowa for many years and he has always religiously owned and hunted English setters. Unknown to me at the time, Ray had brokered the breeding of Taconite Red and Doc’s Limited Edition (Maime) to obtain a replacement female pup for a setter he had recently lost. On May 18, 2008, Maime whelped six healthy puppies, two females and four males. By prior agreement and word of mouth, all of the puppies were selected to be taken to new homes except the last Blue Belton male.

Unable to place the pup and out of options, Ray and dog arrived in my driveway unannounced. “Here’s your dog,” Ray said after he opened the hatch to his SUV revealing two ten week old English Setter puppies in a wooden dog crate. “The black and white male is yours. I’m keeping the female,” he said as he handed me the pup. Caught off guard I tried to come up with excuses not to take this dog, but I couldn’t help imagining that black and white setter coursing through a huge field of CRP, two hunting partners searching for that elusive rooster pheasant. As my mind drifted I managed to forget the work and effort a puppy demands. Ray unloaded a complimentary bag of dog food and vanished up the street. It seemed the dog had chosen me, not the other way around.

The dog was named Sweet Lou and that day marked the beginning of my present passion for hunting and training English Setter gun dogs. Over the years Lou has developed into that bragging dog that I envisioned in my driveway. From the beginning it was apparent he had been blessed with special talents and skills. His intensity in the field coupled with his bird finding ability puts him in a class all by himself. In April 2013 Lou became the only English Setter in Iowa to earn the prestigious and coveted American Kennel Club’s Master Hunter Title.

In 2012 we obtained Adeline to provide a second setter for guided hunts and to use in our future breeding program. Adeline is a tri color setter from a Ryman line and has quickly become an asset in the field with her tracking ability and close working style. She is currently participating in hunt tests and is expected to earn her master hunter title next year.

Today you will find Lou and Adeline being utilized as my personal hunting companions and being called upon to produce birds for guided hunts and celebrity charitable events. Sweet Point Setters is a small family business dedicated to passing on the traits that have made Sweet Lou so successful in the field and to continue to develop superior master hunter caliber English Setters. 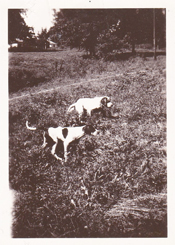 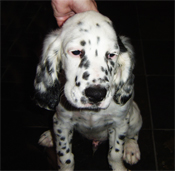 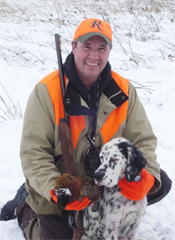 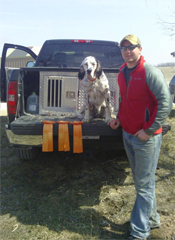