HomeBlogNFL Hunt with the Aiming for a Cure Foundation

NFL Hunt with the Aiming for a Cure Foundation

For the eighth year in a row, Sweet Point Setters has been privileged to support the Aiming for a Cure Foundation by volunteering to guide celebrities and teams of hunters at Highland Hideaway Hunting in Riverside, Iowa, in their annual fundraising event. Founded by Steve and Jodie Ries after the loss of their son, Ben, to brain cancer, the foundation continues to provide support to families with children fighting this terrible illness and funding research to find a cure.

After launching our web series, Sweet Point‘s Setter Tales two years ago we have wanted to film an episode about our relationship with Aiming for a Cure Foundation and give more awareness to this organizations noble mission. This is the year we do it.

A normal upland hunt can be difficult to film but the logistics of the Aiming for a Cure event with four closely scheduled hunting sessions, multiple hunters and multiple dogs presents many more challenges. This weekend we will utilize a three man camera crew to follow the action. The AFAC weekend can be challenging physically for both guide and dogs especially those of us longer in the tooth. Four hunting sessions lasting about three hours each will only be a success if the participants experience superior dog work, remain safe in the field, and get their birds. Oh yes, the birds! Each team and celebrity can harvest up to twenty five pheasants. One pheasant is banded and provides additional points for the team. These scores coupled with scores earned on the sporting clay course determine a champion each year.

To add to the fun and the challenge this year we were asked by Todd Ettleman, Aiming for a Cure Foundation Board member if we were interested in filming a Friday pheasant hunt with three NFL players, Brandon Scherff, Washington Redskins, Austin Blythe, Indianapolis Colts, and Matt Tobin, Philadephia Eagles.  This hunt will include Austin Stallman, a 15 year old cancer survivor.  We jumped at the chance to have young Austin experience upland hunting over our setters as well as to document the tremendous support these former University of Iowa football players and current members of the NFL provide to Aiming for a Cure and the kids. Another half day hunt added to the physically grueling format of four half day hunting sessions on dogs means the young setters, Major, Duchess, and Darby may get thrown in to the deep end on Sunday ready or not!

Friday morning at 5:00am starts the morning routine of checking equipment and getting the the setters ready to go. We will need to be at Highland Hideaway Hunting in Riverside, Iowa, by 7:30am and the trip takes about 45 minutes door to door. My sons, Will and Travis met me at the house at 6:30am and with it still dark we are on the road headed for Highland Hideaway Hunting to meet with Todd Ettleman, his son, Nate, Steve Ries and the other hunters. At Highland before heading to the field we got an opportunity to chat with Brandon Scherff, Matt Tobin, and Austin Blythe that all played their collegiate football at the University of Iowa. Today Travis and I will guide the group with our setters, Adeline, Sweet Lou, and Darby and joined in the gundog ranks by another Sweet Point setter, Asa, owned by the Ettleman family.

After introductions at the Highland Lodge we headed over to field #2 located just behind the Lodge. We put Sweet Lou and Adeline on the ground with Asa, a Setter from our April litter owned by the Ettleman family.  A warm sunny day greeted us as we headed into the field and it didn‘t take long for the dogs to locate some birds along the timber line at the south edge of the field. Nate and his Dad quickly bagged a couple roosters over points by Asa and it was game on. Young Austin had never hunted over dogs before and I walked with him giving him some insight on how the setters work finding bird scent and pointing birds. It wasn‘t long before Sweet Lou locked on point and he had his first chance at a pheasant. We were all rooting for Austin as the rooster rocketed skyward and his shot hit its mark. With all this young man has faced it was gratifying to see him physically able to be with us in the field having fun with the NFL guys and to get a couple birds over dogs for the first time was a bonus.

After walking to the far East end of the field and back we stopped by the trucks to pick up some more ammunition and to grab some drinking water. Travis got his setter, Darby, out of the truck to give us more dog coverage. Darby is also out of our spring litter and was getting her first opportunity to hunt with litter mate, Asa. With Travis handling Darby she quickly got her field rhythm and joined the search for bird scent. As we came along the plum thicket near the pond the setters were all getting birdy. Like Adeline, Darby is no shrinking violet and some woody cover proves no deterrent to her search for birds. As we hoped the pheasants seeking refuge in the thicket were pushed by the setters to the end of the woody cover where Darby, Asa and gang stood on point. Quickly a rooster took flight and was brought down by some team shooting.

The group pushed the upper food plot and the northwest section of the field bagging some more birds before finishing for lunch. At the conclusion of the hunt we met at the truck for some interviews, photographs, autographs and some laughs as we all compared notes on the great morning we had all experienced.

Maybe it’s their Iowa roots but I found Austin Blythe, Brandon Scherff and Matt Tobin to be fantastic guys that are the kind of role models the NFL should be proud to have in their ranks. These gentlemen could have been a thousand different places but chose to spend this weekend using their NFL player platform to promote and support the research to find cures for kids just like Austin Stallman. 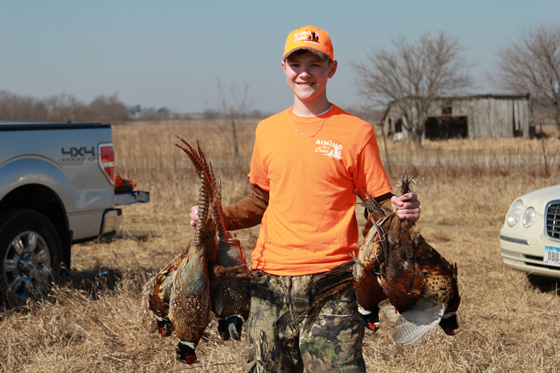 And it doesn‘t end there. As Travis and I were still in the field conducting tail gate checks on the setters, Brandon Scherff, Matt Tobin, and Austin Blythe were headed to the University of Iowa Children’s Hospital with the Ries family to meet with some of the kids being treated for cancer. We all pray that continued advances in cancer research will result in some of those kids having an opportunity like Austin, to join us in the field someday.

We had a beautiful morning and our videographers, Will, Ned and Josh worked hard to film a great story of some good men giving back to help a lot of kids.

With a successful morning hunt behind us we now set our sights on tomorrows beginning of the Aiming for a Cure celebrity hunt which will require as much dog power as we can muster. I hope the young Setters, Duchess, Major and Darby are ready!